15 Jul The Magic of compounding interest

Did you know that Albert Einstein once referred to compounding interest as “the eighth world wonder?” If you’re not familiar with this financial term, Einstein’s fondness for it might surprise you. The word “interest” can trigger some negative emotions because it’s often associated with others charging you interest on a debt, but don’t forget that you can also earn interest through your savings and investments.

Savings, investments, and the interest you earn on them are crucially important to your retirement plan. According to Forbes, roughly 75% of Americans over the age of 40 are failing to keep up with saving for retirement, and close to one-third report that they have no retirement savings at all. It’s more important than ever to take this matter into your own hands because the future of Social Security is fairly unclear. Thankfully, the magic of compounding interest can help you prepare for retirement, with minimal effort and investment!

You may be familiar with simple interest, which is calculated based on only your initial investment. With compounding interest, you earn interest not only on the principal amount but on any previous interest you’ve accrued as well. This allows your wealth to grow exponentially.

When should I start saving for retirement in order to take full advantage of compounding interest?

Now! When it comes to saving for retirement, the more time you give yourself, the better. That means if you’re young, it’s not too early to start, and if you’re already approaching retirement, it’s not too late. No matter where you are in your journey, the answer to when is the right time to act is now. We understand that the younger you are when you start saving, the less income you may be bringing home, and therefore the less you may be able to afford to put away. However, even if you feel like what you are putting into an account with compounding interest is insignificant, it really isn’t as it will exponentially grow over time.

I’m sorry, I still don’t really get how compounding interest works and why it’s so important to start saving for retirement at a young age... Can you give me an example?

With compounding interest, the earlier you start saving for retirement, the less overall funds you’ll have to contribute. An initial investment that you might consider modest can add up to a large sum over time, even if you stop contributing more money. However, starting to save early and continuing to make consistent deposits is the ultimate combination. Here's an example from Money Under 30 that shows why this is true… 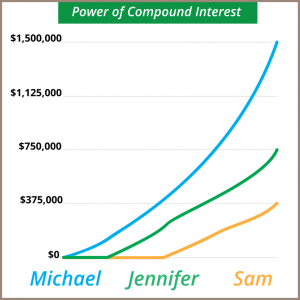 The graph plots the savings strategies of three fictional investors, each of whom saved $1,000 per month over a 10-year term with an average annual return of 7%. None of the three made any withdrawals until they reached age 65. However, Michael started saving at 25, Jennifer started at 35, and Sam didn’t start until he was 45.

The chart shows how this simple difference in the age that these fictional individuals started saving resulted in their ending balances being dramatically different. This is because of compounding interest. Michael’s ending balance is so large because his investments had decades to accrue interest on both his principal amount and on what ended up being many years of past interest because he started so young.

Oh, I see! So, how exactly do I start saving for retirement in a way that will make the power of compounding interest work for me?

There are a variety of answers to this question...

To learn more about which type of retirement account is right for you, contact your financial advisor. They’re just the right people to help you navigate through this whole process in a personalized manner. However, there are plenty of online calculators that can help you assess compounding interest rates, such as Investor.gov, Financial-Calculators.com, and TheCalculatorSite.com. Whichever action you decide to take to make sure you’re on the path to a great retirement, make sure you do it as soon as possible! Time is your secret weapon when it comes to battling financial anxieties and making compounding interest work for you.